Just another brick in the wall…

The year was 1974.  We had lived in our new house in St. Paul for a year and it was finally summer vacation.  The past school year had been difficult.  Starting a new school in the eighth grade was not fun especially when I didn’t want to move.  One good thing from the school year was I finally had a new friend and her family invited me to go with them on a camping trip for a week.  My parents agreed to let me go.

My friend invited me to go and her older brother invited his friend to go.  We slept in one tent and her brother and friend slept another tent and their parents in a small camper.  It was one of the best weeks of my junior high days.  All day long we spent time on the Cannon River either swimming or fishing and just laying in the sun.

My friend’s brother had discovered Pink Floyd as his new latest, greatest band.  He played the cassette tape over and over all week-long.  I’m sure everyone in the campground was tired of it by the time we went home.  The words of Pink Floyd will forever be etched in my brain like Just Another Brick in the Wall and song Money.  I can still hear the sound of the cash register from the beginning of Money.

The brick wall pictured above is downtown Detroit.  It was next to a parking lot for a bar we ate lunch at last fall when we visited Detroit.  It was unlike any other brick wall I had seen because it didn’t look like they took any pride in their work.  It was still unique to look at along with everything else nearby the bar.

This past week my husband and I spent the week driving home from Michigan. We were blessed to see most of the state adorned in beautiful fall colors. Part of our trip took us to Bond Falls, Michigan. It was tucked away in a beautiful hillside just waiting to be discovered. While we were there we were treated to sun showers off and on all afternoon as we explored.

We are home again and the colors are starting to peak where we live. I am home with a new love and appreciation for where we live.

Detroit Reflections and Investigating the Thumb

We are on the road again. My husband and I flew out of Mpls. on Tuesday afternoon for Milwaukee, WI with a destination of Flint, Michigan. We are once again combining business and pleasure. We decided to seek out some fall colors. He purchased two cars both in Michigan that we will drive back to Minnesota through a northern route of Michigan, Wisconsin and Minnesota.

We had an hour lay over in Milwaukee around sunset. Loved our flight with Frontier except for the sales rep that sat two seats behind us and never stopped talking to a women also sitting behind us. I think he tried to impart all his wisdom in that one hour. It’s a good thing that our flight wasn’t any longer I fear he might have run out of knowledge to impart. 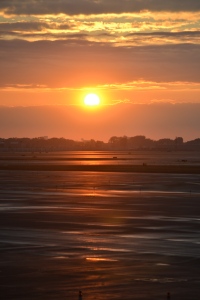 Before we left our Super 8 in Flint, Michigan this morning I had to take a picture of one of the oddest things I’ve seen in a motel. 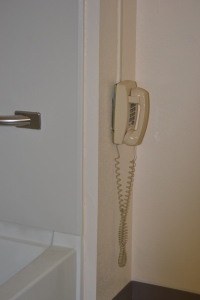 I don’t know about you but the last place I want to talk on the phone is in the bathroom. There was another phone on the night stand in the room. I forgot to ask before we left if all the rooms had a phone in the bathroom or was it just our room.

We headed for downtown Detroit because neither of us had been there before. We found a great restaurant downtown The Sweetwater Tavern. They had excellent food and it reminded me a little of the Cheers bar from the tv show.

This was my favorite of the two but both were fun to photograph.

We rode the People Mover around downtown before we left. It took about 15 minutes for a lap around the city above the street. Just 50 cents a piece to ride. What a bargain.

After we left Detroit we headed north up the east side of Michigan affectionately called the thumb of Michigan. We stopped at Port Sanilac, MI

After we left Port Sanilac we continued north to Harbor Beach, MI where we planned on finding a room to spend the night. We tried to find a hotel using the Magellan navigation system that we purchased in Detroit. We followed the directions and ended up on a dead-end street near this pier but no hotel.

We didn’t find a hotel to stay in this town so we headed west to Bad Axe, MI which was where we planned on going in the morning to pick up our second car that we are driving home. We looked to see if there was a hotel in Bad Axe for the night. Our Magellan told us there was a Holiday Express in Bad Axe. We followed the directions which took us all the way through town and out-of-town, right off the main road out on a gravel road and proudly announced “You have arrived”.

I don’t think so, we were surrounded by corn fields. We turned around and went back into town and found out that everything in town was booked. Apparently there are a lot of construction workers erecting wind generators and have snatched up all the rooms. We asked at the Econolodge if there was a Holiday Express in town and they directed us to it.

I waited in the car while my husband went inside to see if they had any rooms. He was in there for a long time while the desk clerk called all over town for a room for us. There were none. He said “We have one more possibility.” Someone had a reservation but had not arrived yet. They tried to run their card for the room but could not get it to go through. They tried calling the phone number provided to confirm the card number for the reservation but could not reach the party. It was 9:30 already and they hadn’t checked in yet. They gave us their room.

I am thankful for the room but can’t help but wonder if someone will arrive later this evening to no room in a town with no vacancies.