Wildflowers with some Fiddle heads thrown in for fun.

Each spring I delight in looking for wildflowers in our area of Central Minnesota.  This year it has been difficult because of the late spring.  I have a few favorite places where I know I will find wildflowers each year.  I visit those places each week in search of the flowers I think should be blooming at this time of year.

Next I found the Bloodroot.  They were not as plentiful as the White Trout Lily but they are some of my favorites.  Before their flowers open they remind me of miniature tulips.  I wish they bloomed longer.

After I found the Bloodroot I got a couple of shots of the ferns starting to shoot up. and that’s where the Fiddleheads thrown in for fun comes in.

Next I headed over to another favorite wildflower place in Little Falls, Minnesota, Pine Grove Park.  It was there that I found the Trillium just starting to bloom.  Next week they should be in full bloom which is always fun. 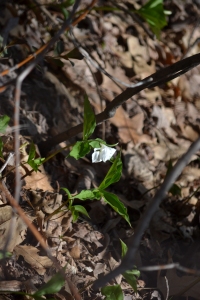 Last but not least were the Hepatica.  I love how these wildflowers come in various hues from white to blue with a little bit of purple on occasion.

Have a great weekend.  I am hoping to enjoy the rain we desperately need this weekend while reading a good book.

Posted by flyinggma on May 17, 2013 in Nature, Photography, Wildflowers

By now I am afraid that my regular readers may be tired of my obsession with wildflowers. Today as part of my usual Wednesday routine of an early morning bible study and transferring motor vehicles titles I once again visited some of my favorite places looking for what is new in the wildflower department in our part of central Minnesota. I was not disappointed.

I was happy to see that the Trillium were still blooming along with the violets. I even saw some Trillium in wooded areas just off the road I was driving this morning. I visited a park near the Mississippi River and found my first Jack-in-the-pulpit and Columbine of the season. Then I drove over to Pine Grove Park and found a couple of plants that have blossoms that aren’t yet open and I can’t seem to identify them yet. I will have to wait for them to open to decide what they are for sure. Without knowing the color of the flower it’s sometimes hard to figure out what it is.

On the way home I saw some Winter Cress along a farm field. There was plenty of yellow out there but mostly dandelion and very little Winter Cress except in a few places.

After work today I went over to my brother-in-law’s home to check on the progress of the Lady Slippers. They have some plants in the woods near their home. They aren’t quite open yet so I will have to wait a few days before I take some pictures.

This morning on my way into town for bible study I drove past a friend’s home and saw a pheasant standing on top of a rock she has in her yard in the middle of her garden. I thought that is a really cool statue of a pheasant and then it moved. A real pheasant had perched itself on top of the rock in the garden. I wasn’t quick enough with the camera so I will have to be better prepared next time.

Posted by flyinggma on May 25, 2011 in Nature, Photography, Wildflowers

Small town living isn’t for everyone but it suits me.  I love the charm of the old buildings.  Little Falls, Minnesota is the nearest larger town to where I live.  It’s about 20 miles from my home.  The estimated population in 2009 was 8067.  The population of the even smaller town where we live is 425.

This past week I took some pictures of some of my favorite places in Little Falls.  At some point in time they hired someone to paint some murals in some of the old buildings in town.  This is one of my favorite murals.

This past week I did a post on roman numerals on clock faces.  One of my favorite things in Little Falls is the clock on the old courthouse.

This is another photo that shows the Airport sign in it’s original location at the drive-in.  The quality of the picture isn’t the best because it is a picture of a picture.

This is a picture of the illuminated airport sign in the Black and White Cafe. 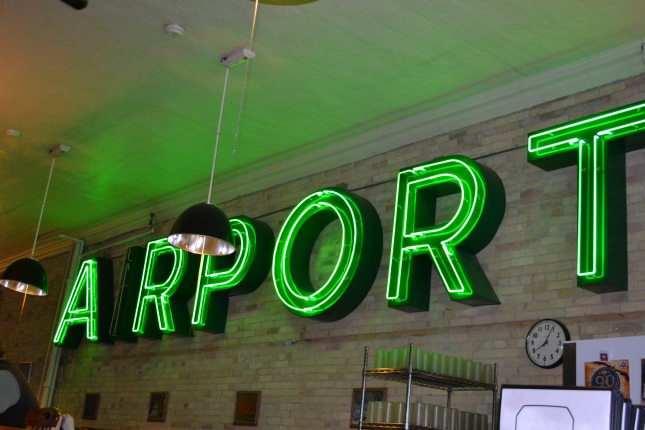 This is a picture of the Little Falls train station.  When I was young my Mom, brother and my two younger sisters road a train from the Twin Cities to Little Falls.  It was my first train ride and my Grandma met us at the train and drove us to her home about 30 miles from Little Falls.  My mom’s hometown was Little Falls. 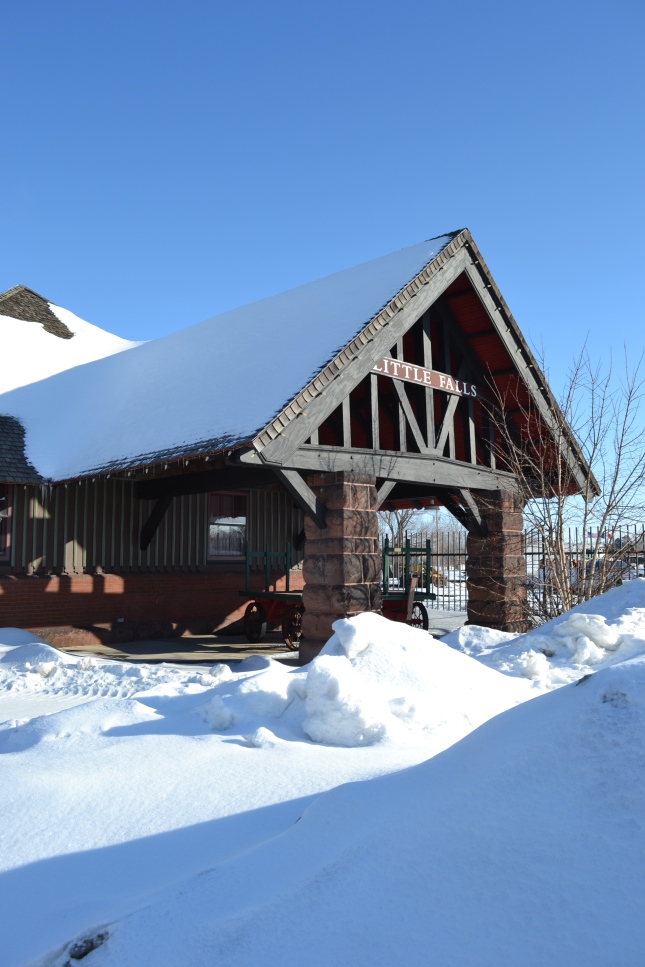 The train bridge is still one of my favorite sites.

I like the familar sites in a small town.  Things remain the same for many years never seeming to change. When I think back to some of the first trips to Little Falls compared to recent ones I know that there have been changes in town but they seem to have happened very slowly and almost unnoticable unlike in the big cities where buildings seem to appear overnight.

Posted by flyinggma on February 11, 2011 in Photography, Reflections