While we often spend our days

The past and the future,

Each day has to offer

Just outside our tattered windows.

People Can Be So Cruel

Tonight my husband treated me to a movie to ward off those Sunday Night Blues. He took me to see the movie The King’s Speech.

I loved the movie but came away feeling unsettled. I wondered after hearing the story of the king if I have inflicted pain on another’s life that has affected them already in their life or will continue to affect them in a harmful way.

It made me search myself for words or actions directed at others than may have caused them the kind of pain the king dealt with his entire life.

As a wife, mother, daughter,sister, teacher and friend the opportunities have been many to say or do the wrong thing or been interpreted in the wrong way. I hope that hasn’t been the case. I’ve tried to be kind and consider the weight of my words and actions.

When my kids were in school and would come home telling stories of cruel acts of others to others I couldn’t help but repeat the same words over and over to them. Be kind! Be kind! Be kind!

As adults my kids still relate stories to me of cruel acts that happened while in school. As a teacher I had parents talk to me about their child being teased or picked on at school or on the playground. 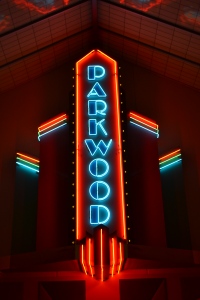 All I could do was to talk to students and their parents in hopes of things becoming better but often all it did was make things worse and they became more creative in their acts.

My husband as chairman of the school board has received phone calls from parents and grandparents over the past couple of years about teasing and bullying of students. Times haven’t changed much but with Facebook, texting and cellphones it seems things travel faster and farther than ever before.

If only all would heed the words…Be kind to all, the world would be a better place.

B is for Books, Biscotti, Bread, Biscuits and Building Blocks

This Sunday evening is different from most for me.  I’m usually plagued with a serious case of Sunday night blues but not tonight.

I decided that I needed to get a thing or two off my to do list this weekend.  The first on the list was to hem 2 pair of slacks and 2 skirts for my mother-in-law that she dropped off nearly two weeks ago.  I accomplished that yesterday afternoon.  Little did I know that my daughter would bring me two pair of slacks that she needed hemming as well home this weekend.  I finished them for her this afternoon after church.

This afternoon we took the snowmobiles out of the garage and the girls took grandson Jack for a snowmobile ride.  He loved his ride but  didn’t like getting bundled up like Ralphie from A Christmas Story and complained loudly.

After supper I decided it was still early enough to bake a couple of loaves of bread.  While I was waiting for the bread to rise I made a batch of biscotti.  In the middle of my baking my youngest daughter decided to make Buttermilk Biscuits.

While we were busy baking Grandpa kept grandson Jack busy building with the blocks in the other room.  He has learned how to stack the blocks into a tower rather than just knocking down the towers you build.  Quite an accomplishment and he is generally pretty pleased with himself and applauded his successes.

We have had our fill of the bread, biscotti, and biscuits.   I’m finally settled into my recliner in a messy but quiet house with a cup of coffee and a good book to finish off a busy weekend. 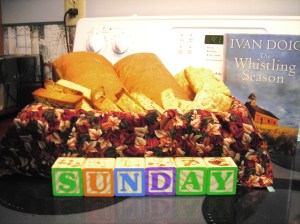 Posted by flyinggma on December 5, 2010 in Family, Life Happens

It was about a month ago when I first posted Sunday Night Blues. Tonight is a different kind of Sunday Blue. Today and tonight rather than sitting and thinking about going back to work tomorrow already I started to do some things that I knew would make my walk out of the door tomorrow morning for work much sweeter.

Yesterday after I got home from work around 1pm I started cleaning up “hot spots” in my kitchen. For those of you who don’t know what “hot spots” are in my kitchen they are areas that tend to accumulate miscellaneous stuff that has no place in my kitchen except for the fact that someone placed them there because they were too lazy or tired to put them where they really belong. For example winter coats always end up on the backs of the kitchen chairs because of course they will be worn again sometime this weekend so why put them away now. The other stuff that tends to accumulate in my kitchen is the mail for everyone in the family.

I get mail for my four grown children, my husband and I. The kids come home just about every weekend and pick up their mail but I’ve yet to find a place to keep it where it will be accessible but not out of sight because things like bills need to be paid. I’m working on a basket system for each of them and I try to handle our mail on a daily basis. I’m trying to pay bills as they come in the mail and not wait if possible and get read of junk mail daily. My new resolution for paper is try to touch it only once if possible. File it, pay it, or trash it ASAP so it won’t accumulate or have to be dealt with later.

Last evening I spent putting the second coat of paint on our family room we’ve been working on for about two years. It felt so good to finally get that done. I put the outlet covers and furnace vent covers on after the paint dried. Next I put up some shelves to hold our DVD’s, CD’s and books in the family room so that allowed me to unpack some boxes and bring all the movies to one location in the house. Once there is a place for something in your home and everyone knows where it goes it is so much easier to keep things organized and clean.

Today after church I continued on my progress of finishing things that have been left undone for too long. I dug out some paint for my kitchen and painted a small area that has remained unpainted for the past two years when I had the kitchen floor replaced and took out a pantry and moved the refrigerator to a different wall. The unpainted wall has been the first thing you see when you walk in the front door. It took about 20 minutes to take out the paint and supplies, paint the wall about 8′ by 8′, and touch up a few spots on the kitchen wall. I found a piece of leftover baseboard to install behind the refrigerator on the wall I just painted. That project took all of about 10 minutes to install and complete. Why did I wait so long? Now when I walk into my kitchen each day as I come home from work I am not greeted with an unfinished wall with missing baseboard.

I’ve been doing laundry all day so that will be done tonight. Vacuuming the livingroom and bedroom are next. After that its on to the bathroom for a quick cleaning. Why all the work around the house this weekend? Tomorrow we will have a visitor new to our home, a friend of my daughter. I started thinking this week that we only get one chance at a first impression. My daughter’s friend is no different from any other visitor to our home. Not a celebrity just someone who is coming to our home for the first time. Lately I’ve been thinking that I could do a better job at first impressions and caring for my home and that may just lead to less Sunday Night Blues.

Posted by flyinggma on February 21, 2010 in New Challenges, Reflections

Once again its Sunday night and the Sunday Night Blues have set in.  In Minnesota where I live at this time of the year it is already dark around 5pm so it really seems late by 7:00pm.  I get restless and irritable on Sunday evenings as I mourn the loss of yet another weekend with my long to do list not done once again.  Oh, I manage to get some things done each weekend but when you work six days a week and don’t get home until 1-3pm on Saturday afternoon its hard to dig into that to do list.

Maybe if I started with a shorter to do list I might feel like I’ve got something to show for my time.  I’m seriously working at cleaning out the clutter around home so there is actually less to be responsible for and to clean but with 4 kids in and out of the home all weekend its hard to keep up and pick up until they’ve gone to their homes on Sunday night.

About a year ago my husband tried to get rid of the Sunday night blues with a change of scenery ie.  a movie or motorcycle ride.  It works to some extent but when you come home after dark to a messy home and need to get up for work Monday morning tired before your week has begun it is only a short term solution and then it becomes a Miserable Monday morning instead.

Its hard to resist the temptation to sit in my livingroom chair and stare at my surroundings feeling sorry for myself and instead getting up and accomplish something that will indeed make me feel better about the day even if it is only going around the house emptying the trash and maybe picking up and sorting the laundry for Monday morning.

Just a sidenote…I love Wednesdays, not for what you might think.  Wednesdays at my home are garbage day.  I love my garbage man.  Every week I fill up the trash can and wheel it out to the road, he picks it up and the stuff that filled the can is something I never have to pick up or deal with again.  If only I could have that attitude about other things in my home!

Posted by flyinggma on January 17, 2010 in Life Happens