RSS
← Halfway to the Finishline
PIC (Pilot in Command) → 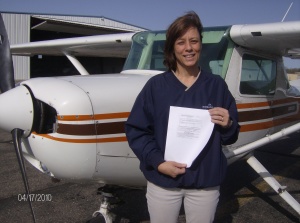 April 17, 2010 will be remembered by many people for different reasons.  For me it is the date when I finally achieved a life goal of earning my Private Pilot Certificate.  The journey began almost two years ago when I started learning to fly.  It was my original goal to complete my certificate by January 25, 2010 when I turned 50.  It took me a few months longer but I finally finished this morning.   I got to the airport at 8:00am this morning to meet Bill(my examiner).  I told him I had done my weather briefing already and just needed to preflight the airplane and then we would be set to go.  He reviewed what we would be doing in the airplane once I was ready to go.  I went to preflight the plane that I thought we would be in but Bill said he had changed me to a different plane that I already had the weight and balance completed for yesterday’s flight we didn’t take.

I preflighted the plane and had it fueled.  I asked him if he would like a passenger briefing and he said “No, it wasn’t necessary because he was familiar with the plane already.”  I called ground and said that we were ready to taxi and we were cleared to taxi to runway 31 via Echo and Alpha.  We taxied down to the run-up area near runway 31.  I did the run-up and then taxied to the holdshort line for runway 31.  I called the tower to say I was ready for take-off.  He told me to hold short for landing traffic.   After the other traffic had landed and cleared the runway the tower cleared me for takeoff.  Bill told me that my first takeoff would be a softfield takeoff.  I took off and then we proceeded on my crosscountry course.  I did two ground speed checks and then he set the VOR frequency and asked to me to set up to fly the the VOR he put in the radio.  I tuned it in and turned my course to the south to track to the VOR.

Next he had me put the hood on and we went through turns, descents, changes in heading and airspeeds.  He had me do 180 degree turn to simulate going into the clouds and getting out of them.  After the hood work he had me set up for slow flight in the dirty configuration and make 90 degree turns left and right.  Next he had me do a power off stall.  After the power off stall I had to do a departure stall.  Once the stalls were completed it was on to steep turns.  He told me before I began that I would make a left steep turn and then immediately roll into a right steep turn.  This made me a little nervous because I never done that before with my instructor without some time in between the two steep turns.  After I was done with the steep turns he pulled the power on me for my emergency landing.  I found my field directly below me and circled down to my altitude to recover at while adding flaps for my descent.

After completing the manuevers he had me track the VOR back to the airport.  He said coming in that I would do a shortfield landing followed by a shortfield takeoff.  When I turned base to final, I over shot final and did a go around.  I came back around and did a short field landing followed by a shortfield takeoff.  When I came back around to land he said it would be a full stop so I radioed the tower and said so.  We taxied off at A3  and into the ramp and parked the plane.  He congratulated me and said I passed and we would talk about a few things about the flight inside.  I did a final check around the plane, got the Hobbs, tach, and tin for the plane and headed inside.  Once inside we went and debriefed the flight.  He said that I forgot to pull the carb heat in my emergency landing and that I needed to trim the plane more effectively and use more right rudder.  He demonstrated how my foot should be placed on the floor of the plane to most effectively use the rudder.  He said overall a good performance in flight.

After the debriefing we went to the computer and did what we needed to do with IACRA and printed my temporary certificate and he endorsed my logbook for the checkride.  One of the CFI’s took me outside to take my picture by the plane with my certificate.  I was absolutely exhausted when everything was done.  Two sleepless nights followed by my the checkride.  My examiner wasted no effort or time on the plan of action he had to get us through the checkride efficiently.  When it was all done I was sure that hours must have passed but was surprised to see 9:30am on my watch.  Only 1 1/2 hours had passed.  A flying friend had told me that he thought I would probably find the checkride enjoyable once it got started.  He was correct but he didn’t prepare me for how fast we would complete everything.  It was hard to have the checkride spread out over two days but the better weather for the flight was well worth the wait.  PRIVATE PILOT …Finally!

Posted by flyinggma on April 19, 2010 in Flight training

← Halfway to the Finishline
PIC (Pilot in Command) →